Chuck Norris is one quarter Cherokee

Chuck Norris started studying martial arts in Korea while in the U.S. Air Force in the late 1950s. 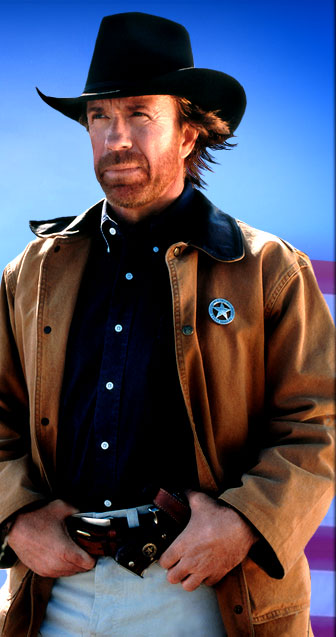 The oldest of three boys, Chuck Norris once described himself as “the shy kid who never excelled at anything in school.” His father was an alcoholic who all but disappeared from Norris’ life after his parents divorced. At the age of 10, Norris moved with his mother and brothers to California. He attended North Torrance High School.

He left the service in 1962, and started working as a karate instructor. Eventually, this developed into a chain of more than 30 karate schools.

Norris was defeated in his first two tournaments, dropping decisions to Joe Lewis and Allen Steen and three matches at the International Karate Championships to Tony Tulleners. By 1967 Norris had improved enough that he scored victories over the likes of Lewis, Skipper Mullins, Arnold Urquidez, Victor Moore, Ron Marchini, and Steve Sanders. Norris would be a two time winner at S. Henry Cho’s All American Championship.

In early 1968, Norris suffered the tenth and last loss of his career, losing an upset decision to Louis Delgado. On November 24, 1968, he avenged his defeat to Delgado and by doing so won the Professional Middleweight Karate champion title, which he held for six consecutive years. In 1969, he won Karate’s triple crown for the most tournament wins of the year, and the Fighter of the Year award by Black Belt (magazine) magazine.

Norris made history in 1990 when he was the first Westerner in the documented history of Tae Kwon Do to be given the rank of 8th Degree Black Belt Grand Master. In 1999, Norris was inducted into the Martial Arts History Museum’s Hall of Fame. On July 1, 2000, Norris was presented the Golden Lifetime Achievement Award by the World Karate Union Hall of Fame.

He taught several celebrities, including Priscilla Presley, Donnie and Marie Osmond, and actor Steve McQueen. McQueen encouraged his teacher to try acting. In addition to being an instructor, Norris also was a fierce competitor. He participated in numerous martial arts tournaments, and he won many of the events he competed in.

Norris created the martial art Chun Kuk Do, which is based primarily on Tang Soo Do and includes elements from every combat style he knows. Like many other martial arts, Chun Kuk Do includes a code of honor and rules to live by. These rules are from Norris’ personal code. They are:

While he had made one brief film appearance previously, Norris made more of an impact on movie-goers in 1973’s Return of the Dragon. One of the highlights of the film was a fight scene between Norris and martial arts action star Bruce Lee, staged in the famed Roman Colosseum. In 1977, Norris had his first starring role in the action film Breaker! Breaker!.

Critics may have considered Norris a stiff and wooden actor, but movie audiences loved to watch him mete out swift justice to bad guys in such films as Good Guys Wear Black and Forced Vengeance. In Missing in Action (1984), Norris played a former prisoner of war who returns to Vietnam to free other soldiers still being held. He did this film and its sequels as a tribute to his younger brother, Wieland, who died in combat in Vietnam.

Norris received warmer reviews for his cop movie, Code of Silence (1985), and teamed up with the legendary tough guy Lee Marvin for the military action film The Delta Force (1986). Norris’ box-office appeal, however, was beginning to fade by the early 1990s. No longer making hit movies, he made the switch to the small screen with Walker, Texas Ranger. Norris played Cordell Walker, an honorable crime fighter, for eight years. The show had a strong following, and was still faring well in the ratings when it went off the air in 2001.

Chuck Norris has been married twice. He has three children from his first marriage to Dianne Holechek. The couple divorced in 1988. In 1998, Norris married Gena O’Kelley and they had  twins three years later.

Norris has written several books. He published his autobiography, The Secret of Inner Strength: My Story

in 1988, which became a bestseller. A few years later, Norris penned a self-help tome, The Secret Power Within: Zen Solutions to Real Problems

In 2007, Norris was made an honorary U.S. Marine for his years of support of the military, in particular wounded servicemen.