Following the successful capture of Louisbourg in 1758, British leaders began planning for a strike against Quebec the next year.The Battle of Quebec was fought September 13, 1759, during the French & Indian War (1754-1763). 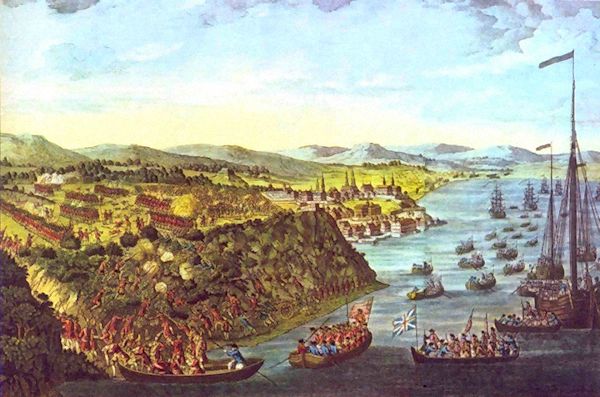 Battle of Quebec, 1759After assembling a force at Louisbourg under Major General James Wolfe and Admiral Sir Charles Saunders, the expedition arrived off Quebec in early June 1759.

The direction of the attack caught the French commander, the Marquis de Montcalm, by surprise as he had anticipated a British thrust from the west or south. Assembling his forces, Montcalm began building a system of fortifications along the north shore of the St. Lawrence and placed bulk of his army east of the city at Beauport.

Establishing his army on the Ile d’Orléans and the south shore at Point Levis, Wolfe began a bombardment of the city and ran ships past its batteries to reconnoiter for landing places upstream. On July 31, Wolfe attacked Montcalm at Beauport but was repulsed with heavy losses.

Stymied, Wolfe began to focus on landing to west of the city. While British ships raided upstream and threatened Montcalm’s supply lines to Montreal, the French leader was forced to disperse his army along the north shore to prevent Wolfe from crossing.

The largest detachment, 3,000 men under Colonel Louis-Antoine de Bougainville, was sent upstream to Cap Rouge with orders to watch the river east back towards the city. Not believing that another assault at Beauport would be successful, Wolfe began planning a landing just beyond Pointe-aux-Trembles.

This was cancelled due to poor weather and on September 10 he informed his commanders that he intended to cross at Anse-au-Foulon. A small cove southwest of the city, the landing beach at Anse-au-Foulon required British troops to come ashore and ascend a slope and small road to reach the Plains of Abraham above.

The approach at Anse-au-Foulon was guarded by a militia detachment led Captain Louis Du Pont Duchambon de Vergor and numbered between 40-100 men. Though the Governor of Quebec, the Marquis de Vaudreuil-Cavagnal, was concerned about a landing in the area, Montcalm dismissed these fears believing that due to the severity of the slope a small detachment would be able to hold until help arrived.

On the night of September 12, British warships moved to positions opposite Cap Rouge and Beauport to give the impression that Wolfe would be landing at two places.Around midnight, Wolfe’s men embarked for Anse-au-Foulon. Their approach was aided by the fact that the French were expecting boats bringing provisions from Trois-Rivières. Nearing the landing beach, the British were challenged by a French sentry.

A French-speaking Highland officer replied in flawless French and the alarm was not raised.Going ashore with forty men, Brigadier General James Murray signaled to Wolfe that it was clear to land the army. A detachment under Colonel William Howe (of future American Revolution fame) moved up the slope and captured Vergor’s camp.As the British were landing, a runner from Vergor’s camp reached Montcalm. Distracted by Saunders’ diversion off Beauport, Montcalm ignored this initial report.

Finally coming to grips with the situation, Montcalm gathered his available forces and began moving west. While a more prudent course may have been to wait for Bougainville’s men to rejoin the army or least be in position to attack simultaneously, Montcalm wished to engage the British immediately before they could fortify and become established above Anse-au-Foulon.

Forming in an open area known as the Plains of Abraham, Wolfe’s men turned towards the city with their right anchored on the river and their left on a wooded bluff overlooking the St.Charles River. Due to the length of his line, Wolfe was forced to deploy in two-deep ranks rather than the traditional three. 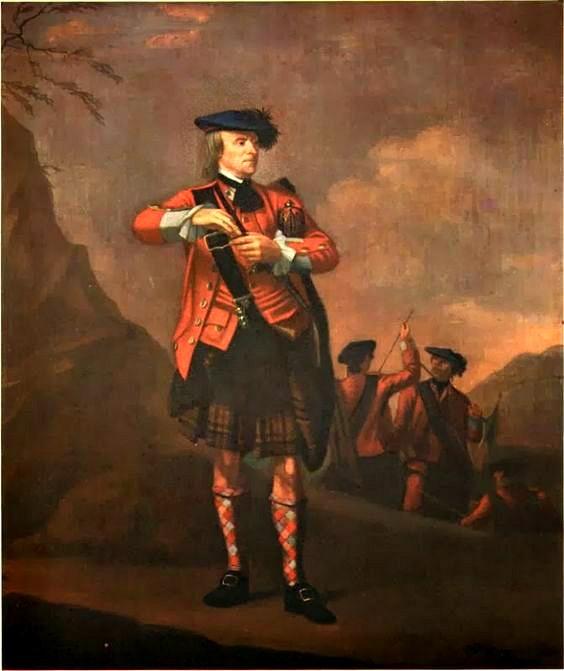 A Pinch of Snuff, Delacour, c.1760. Depicting Malcolm MacPherson of Phoness who, at the
age of 67 joined the 78th Foot as a Gentleman Volunteer. MacPherson distinguished himself
at the Battle of Quebec in 1759 and the following year was presented to King George II.Holding their position, units under Brigadier General George Townshend engaged in skirmishing with French militia and captured a gristmill. Under sporadic fire from the French, Wolfe ordered his men to lay down for protection.As Montcalm’s men formed for the attack, his three guns and Wolfe’s lone gun exchanged shots.

Advancing to attack in columns, Montcalm’s lines became somewhat disorganized as they crossed the uneven terrain of the plain. Under strict orders to hold their fire until the French were within 30-35 yards, the British had double-charged their muskets with two balls. After absorbing two volleys from the French, the front rank opened fire in a volley that was compared to a cannon shot.

Advancing a few paces, the second British line unleashed a similar volley shattering the French lines.Early in the battle, Wolfe was struck in the wrist. Bandaging the injury he continued, but was soon hit in the stomach and chest. Issuing his final orders, he died on the field. With the army retreating towards the city and the St. Charles River, the French militia continued to fire from the woods with the support of floating battery near the St. Charles River bridge.

During the retreat, Montcalm was hit in the lower abdomen and thigh. Taken into the city, he died the next day. With the battle won, Townshend took command and gathered sufficient forces to block Bougainville’s approach from the west.Rather than attack with his fresh troops, the French colonel elected to retreat from the area.

The Battle of Quebec cost the British one of their best leaders as well as 58 killed, 596 wounded, and three missing. For the French, the losses included their leader and were around 200 killed and 1,200 wounded. With the battle won, the British quickly moved to lay siege to Quebec.

On September 18 the commander of the Quebec garrison, Jean-Baptiste-Nicolas-Roch de Ramezay, surrendered the city to Townshend and Saunders.The following April, the Chevalier de Lévis, Montcalm’s replacement, defeated Murray outside the city at the Battle of Sainte-Foy. Lacking siege guns, the French were unable to retake the city.

A hollow victory, the fate of New France had been sealed the previous November when a British fleet crushed the French at the Battle of Quiberon Bay. With the Royal Navy controlling the sea lanes, the French were unable to reinforce and re-supply their forces in North America. Cut off and facing growing numbers, Lévis was forced to surrender in September 1760, ceding Canada to Britain.