Na-Dené (also Na-Dene, Nadene, Athabaskan-Eyak-Tlingit) is a Native American language family which includes the Athabaskan languages, Eyak, and Tlingit.The Na-Dene family includes:Tlingit language: 700 speakers (M. Krauss, 1995) Athabaskan-Eyak Eyak language: 1 speaker, (N. Barnes, 1996) Athabaskan languages:      Northern      Pacific Coast      Southern
Navajo is the most widely spoken language of the Na-Dené family, spoken in Arizona, New Mexico, and other regions of the American Southwest. Dene or Dine is a widely distributed group of Native languages and peoples spoken in Canada, Alaska, and parts of Oregon and northern California. Eyak is spoken in the Alaskan panhandle and today there is only one speaker left.
Genetic relation proposals
Haida, with 15 fluent speakers (M. Krauss, 1995), was once considered a member of the Na-Dené family, but most linguists consider the evidence inconclusive and classify it as a language isolate.According to Joseph Greenberg’s highly controversial classification of the languages of Native North America, Na-Dené-Athabaskan is one of the three main groups of Native languages spoken in the Americas, and represents a distinct wave of migration from Asia to the Americas. The other two are Eskimo-Aleut, spoken in Alaska and the Canadian Arctic; and Amerind, Greenberg’s most controversial classification, which includes every language native to the Americas that is not Eskimo-Aleut or Na-Dené. Contemporary supporters of Greenberg’s theory, such as Merritt Ruhlen, have suggested that the Na-Dené language family represents a distinct migration of people from Asia to the New World. The time of this migration is estimated to have been six to eight thousand years ago, placing it around four thousand later than the initial population of the continents by Amerind speakers. Ruhlen speculates that the Na-Dené speakers may have arrived in boats, initially settling near the Queen Charlotte Islands, now in British Columbia, Canada. According to the (also controversial) linguistic theory of Sergei Starostin, Na-Dene is a member of the Dene-Caucasian superfamily, along with the North Caucasian languages and Sino-Tibetan languages.Professor Edward Vajda from the Modern & Classical Languages Department of the Western Washington University considers these languages to be related to Yeniseian (or Yeniseic) languages in Siberia, which would also support the controversial theory of Starostin and others’.
American Indian Language Family Trees
Goddard (1996) & Mithun (1999)
(preliminary)
LANGUAGE FAMILIES
2. Na-Dene (47)          Haida (2)               Haida, Northern (Canada)               Haida, Southern (Canada)

The Lassik belonged to the Athapascan linguistic family and were connected very closely with the Nongatl, who lay just to the north.

The Hupa belonged to the Athapascan linguistic stock, forming one closely knit linguistic group with the Chilula and Whilkut.

The Wailaki Indians belonged to the Athapascan linguistic stock and to the southern California group.

The Tolowa Indians constituted one of the divisions into which the California peoples of the Athapascan linguistic stock are divided, but they were closely connected with the Athapascan tribes of Oregon immediately to the north.

The Whilkut Indians belonged to the Hupa dialectic group of the Athapascan linguistic family.

With the Hupa and Whilkut, the Chilula formed one group of the Athapascan linguistic stock.

The Mattole constitute one of the primary divisions of those Indians of the Athapascan stock living in California.

The Sinkyone Indians were one of the tribes of the southern California group of the Athapascan family.

The Nongatl belonged to the Athapascan linguistic family and were closely connected with the Lassik.

The Dakubetede were an Athapascan tribe of Oregon which extended slightly beyond the northern border of California. The Dakubetede belonged to the Athapascan linguistic stock, using a dialect identical with that of the Taltushtuntude.

The Kato Indians belonged to the Athapascan linguistic stock, and spoke a dialect peculiar to themselves.

The Bear River Indians belonged to the Athapascan linguistic family, and were most closely connected with the Mattole, Sinkyone, and Nongatl tribes to the south and east.

Navajo president no longer has to speak the Navajo language

Navajo Nation voters passed a referendum last month that allows for the first time for a non-Navajo speaker to be president. The move, while political, sparked a dialogue among people who see their language threatened as never before. Some Navajos say the approval of the referendum represents a paradigm shift. 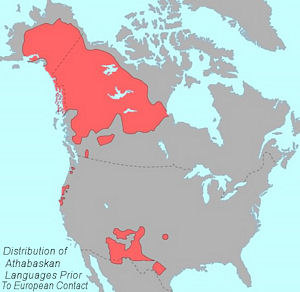 Athabaskan or Athabascan (also Dene, Athapascan, Athapaskan, or Athapaskes) is the name of a large group of indigenous peoples of North America, located in two main Southern and Northern groups in western North America, and of their language family. The Athabaskan family is the second largest family in North America in terms of number of languages and the number of speakers, following the Uto-Aztecan family which extends into Mexico. In terms of territory, only the Algic language family covers a larger area.

Siberian language may be related to Nadene languages

A remote population of a few hundred indigenous Siberians who live thousands of miles west of Alaska speak a language that appears to be an ancient relative of more than three dozen Native languages in North America, experts say.

A panel of respected linguists who met in Anchorage on Friday are hailing new research that links the Old World language of Ket, still spoken sparingly along the Yenisei River in western Siberia, and the sprawling New World family of Na-Dene languages — a broad grouping that encompasses the many Athabascan tribes in Alaska, along with the Tlingit and Eyak people, as well as Indian populations in western Canada and the American Southwest, including the Navajo and the Apache.

A new Athabascan dictionary is available

The Alaska Native Language Center at the University of Alaska Fairbanks has published a new Athabascan dictionary.

The Navajo Code Talkers’ Dictionary was declassified under Department of defense Directive 5200.9. Here it as revised on June 15, 1945.

Dictionary of Jicarilla language in the works

DULCE – Wilhelmina Phone, 72, stores an ancient treasure in her memory: a language known only to a dwindling handful of Jicarilla Apaches. Once each month, she and two other fluent Jicarilla speakers meet in Dulce with University of New Mexico linguists to develop the first-ever Jicarilla dictionary.