The Controversy of Cher’s Heritage

People have questioned whether Cher is part Indian for decades. The rumors persist that Cher has some Cherokee heritage. Are they true?

ethnicelebs.com says, “Cher is an American singer. She was born Cherilyn Sarkisian. Her father, John Paul Sarkisian, was born in California, to Armenian parents; he worked as a truck driver. Her mother, Jackie Jean Crouch, was of English and German, with more distant Irish, Dutch, and French, descent. Cher is also stated to have Cherokee Native American ancestry on her mother’s side, but no Cherokee Native American ancestors are documented on any publicly available genealogies of Cher.”

Cher is usually described as being part Cherokee, but none of her currently-known ancestors are described as anything other than White on US Census records.

If you reference Wikipedia, you will find that “Cher’s father, John Sarkisian, was an Armenian truck driver with drug and gambling problems, and her mother, Jackie Jean Crouch was an occasional model and bit-part actress with Irish, English, German, and Cherokee ancestry.

Yahoo Answers reports: “Her mother is of French and Cherokee descent. Her father is of Armenian descent. Cher was born in California and her father left her and her mother soon after her birth. She was raised by her mother with American traditions and standards.”

Cher has said her father, John Sarkisian, was an Armenian refugee who worked as a truck driver. Her mother, Georgia Holt (born Jackie Jean Crouch in Sharp County, Arkansas, on June 20, 1927), an aspiring actress and occasional model, is of Cherokee, English, and French descent.

Cher has also repeatedly said that all claims of her being part Cherokee are false.

Claims of her Cherokee heritage first surfaced when she sang the hit song, “Half Breed” in 1973.

It seems everyone agrees that Pop was a deadbeat Armenian. And Mom’s family clearly got around. Most sites claim Cher’s maternal ancestors undertook sexual relations with the Irish, English, German, Dutch and French. So, should we also believe she is a gypsy, tramp and/or thief and was born in a wagon of a traveling show just because she sang this song?

Obviously, the claims of her Cherokee heritage were just a publicity stunt to help sell her “Half Breed” song. Mental Floss seems pretty authoritative on the matter:

“Prior to 1973, Cher’s biography always listed her father (John Sarkisian) as being of Armenian heritage, while her mother was of Irish and German extraction. But when Cher’s single “Half Breed” started climbing the Billboard charts (it would eventually hit number one), suddenly she remembered that she was 1/16th Cherokee on her mother’s side.”

wargs.com lists Cher’s genealogy chart to her 9th great grandparents, with no Cherokees included in the chart.

On her Dressed to Kill tour, Cher wore the costume below – at a performance in a Native American Casino!  For the show opener, she donned a feathered headpiece so extravagant, it would make a peacock feel like a wallflower. For “Half Breed” she slipped into this outfit that mixed Indian influences with pure Vegas flamboyance. 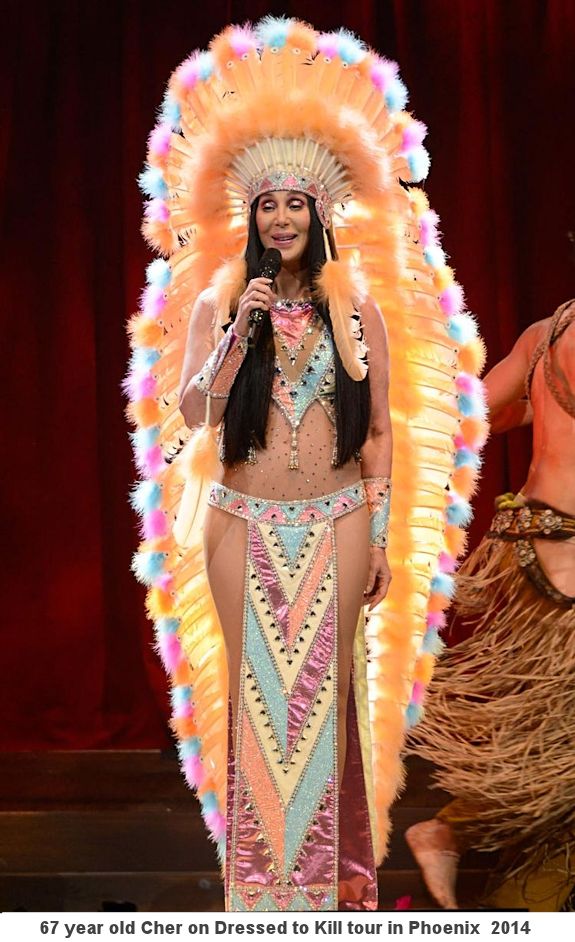 Whether she is Cherokee or not, Cher should know better than to wear an Indian headdress, but it appears she hasn’t learned much in the last 41 years. She should KNOW better than to disrespect Native culture with such an insulting outfit! The defense of such behavior usually comes from those that do not have a clue as to what Native culture and tradition is really all about!

It’s similar to the controversy of sports teams using native americans as mascots. I don’t understand the comments saying this is honoring anyone. When the cultures and traditions in question are being grossly distorted and sexualized, isn’t that pretty much the same thing as say, wearing blackface as a compliment to African americans?

We’re informing anyone who doesn’t know it that Plains costumes like this are stereotypical. That there are hundreds of tribes and most of them didn’t and don’t wear headdresses. That anyone who thinks there’s one “Native culture” and Cher is part of it is ignorant and needs to learn the facts.

To most native americans, she is a cultural appropriator that is enforcing damaging misrepresentative stereotypes.

So I think this mystery is solved, subject to the flexible accuracy standards of the internet and my waning interest in further pursuit of this topic.